The Big Ten missed the mark completely with the naming of their new divisions/logo.

Wow, really? First Orville Redenbacher's "Sisters Of The Poor" comments, now this. The Big Ten has really outdone itself. Originally, they went to 11 teams, but kept calling themselves the Big Ten. Hey, at least the hidden 11 in the Big Ten logo was subtle. Annoying, but subtle--and good design work. But now that there are 12 teams, there's no telling the hilarity that the Big Ten can come up with.

The vaunted conference split into two divisions, which is all well and good, except that the names they chose are about as hokey as calling your conference "The Football Is Fun Conference." Legends and Leaders. Which are you? We couldn't go with some kind of historical names, a geographical East and West, or even something as simple, yet tasteful, as what the ACC did with Atlantic and Coastal? Nope.

Legends and Leaders. It sounds like a fantasy movie from the early 80s with some kind of weird flying animal, a kid fulfilling his destiny and some bad special effects. 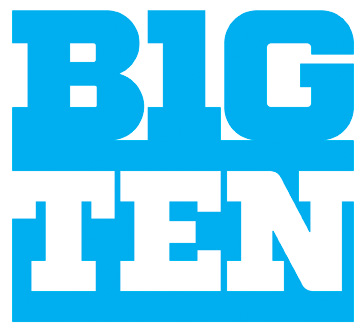 And don't get me started on that logo. It's good to see that they went out and grabbed a branding firm worse than the one that did that atrocity of a GAP logo earlier this year. The Big Ten refuses to be outdone. Should we hire Jim Tressel's six-year-old nephew to draw something up? Naw, no big deal, let's just drop six figures. I'm sure some talented graphic designers can figure this thing out.

What's that? An ugly blue, equally ugly font and absurd proportions? BINGO. Book it. Wrap it up, we're done here guys. Call a press conference. The Big Ten is bigger and BETTER THAN EVER!