Former Cleveland Browns star QB Bernie Kosar is the owner of the Arena Football League's Cleveland Gladiators. How does Gladiator football compare to its NFL and NCAA counterparts, and what could be next for the franchise?

When you hear the words ‘Cleveland football’ one undoubtedly thinks of the colors Orange and Brown, a description perfectly suited for the gritty, diehard football fans of a title starved town. But there is more to Cleveland football then the Browns, or even the Ohio State Buckeyes by extension, and it’s in the form of the Cleveland Gladiators.

I was initially amazed by the number of people present at the Quicken Loans Arena’s will call ticket counter. The main concourse of the stadium was filled with fans with various football jerseys, mostly consisting of Browns, Buckeyes, and of course Gladiators jerseys. The final game of the season was about to start between Cleveland and the Milwaukee Iron, with native high school WR Kyle Kemph singing the national anthem. Mr. Jansen and I quickly retrieved our tickets and headed to our seats. By the time we arrived at our section, the opening kickoff was soaring in the air, bouncing off the tightened goalpost mesh into the hands of the kick returner.

For a fan of NFL, NCAA, or even high school football, going to an arena football game is quite an experience. The differences in rules, presentation, and even the style of play are almost immediately apparent. Ever present throughout the game was a constant stream of stadium audio keeping the crowd engaged in the action…. And the fans were REALLY into it. Stationed in a city with a devoted Browns fanbase along with a multitude of Ohio State alumni, the fans who attend the Gladiators games are truly the most devoted of football enthusiasts. This brings up a legitimate concern for Bernie Kosar and other upper echelon Gladiator officials: Do mainstream Cleveland fans group the Gladiators with the city’s other major professional teams, or does it perhaps lag behind the minor league Lake Erie Monsters due to city wide football overload? Determining the answer to this question could very well determine the direction of the franchise and ultimately its success in the city.

Although the object of all American football is to score the most points via touchdowns, the rules between Arena Football League and the NFL have major contrasting differences. In the NFL there are seven named mediators: a referee, an umpire, a head linesman, a field judge, line judge, side judge, and back judge. The Arena Football League has only five due to the shortened field size. There are four quarters, each consisting of 15 minutes apiece.

Arena football is exclusively played indoors, normally in a NBA, NHL, or NCAA Basketball arena. The field is half the size of an NFL field, only extending 50 yards from end zone to end zone. Tightened mesh rebound nets on both sides of the miniature goal posts allow any missed field goal to return to the field of play for a potential run back. Both ball club place eight players on the gridiron at a time with a full 20-man roster available when needed. Prior to 2007, players who played at the wide receiver or running back position would play both offense and defense, but this rule has since been retracted.

Many Clevelanders know of the Gladiators and of Bernie Kosar’s ownership of the team. Throughout the year, he talks to local sports personalities such as Mike Trivisonno about Browns football while placing in plugs for his own team. During the CLE-MIL game, advertisements were prevalent, bust most surprising to me were the advertisements for Cleveland Browns football merchandise on both the scoreboard and over the arena loudspeaker. Kosar is a representative to the Browns as well as an AFL team owner, but by advertising so clearly on behalf of the Browns he must understand that the Gladiators are the clear #2 Cleveland football team and feel that appealing to Browns fans is the best way to expand his fan base. With this understood, and with Ohio State cashing in with Cleveland fans down in Columbus, supporting the franchise remains a highly calculated and risky move.

As the home of the Cleveland Cavaliers, Quicken Loans arena certainly has the feel of a basketball arena rather than that of a football stadium. Much of the music and the majority of the ‘defense’ chants were identical those used at Cavaliers games, though the touchdown music was unique and heavy in bass. The banners hanging in the upper portion of the arena created a somewhat odd atmosphere when paired with the artificial turf on the arena floor. The atmosphere was simply diverse; a surprising number of die hard Gladiator fans wearing Bernie Kosar jerseys filled the arena, bringing energy and excitement to the game.

The action in between possessions was almost as eventful as the game itself; there was a wide variety of contest games for fans ranging from catching footballs off the goalpost mesh with a bucket, to a football game played by local area mascots, to even a punt, pass, and kick contest. Also, several dance teams and a full team of cheerleaders entertained to wow the crowd during halftime. (Note: Perhaps it’s just us, but are junior dance teams featuring pre-teens really necessary at any professional sporting event? Both football teams actually lingered over 3 minutes on the field for them to finish up their routine.)

That being said, an arena football game proves to be more up tempo then a lot of other sporting events. Rarely does the action slow down. The final scores at the end of the game, and the overwhelmingly good quarterback stats should be a prime indicator of this. The quarterbacks get all the attention as the total number of running plays for both teams combined was in the single digit range. On a fourth down play, no matter fourth and one or fourth and twenty, the opposing defense usually knows what’s coming but usually can’t stop it. Even a lineman can receive passes.

While the action is good, the prices of concessions are unexpectedly high. At nearly five dollars for one hotdog and almost eight dollars for a beer, the prices of food and drinks are higher than even those offered across the street at the Cleveland Indians’ Progressive Field. Perhaps the portions are slightly bigger but come on! One would think that discounted arena food would be a way to draw in more fans, so the team must be doing well enough that they don’t see a need to do so.

As of right now, the future of the Cleveland Gladiators looks good. The team remained competitive and the franchise appears to be doing much better than its Las Vegas predecessor. Keeping the team relevant with a more competitive Browns team and top ranked OSU will prove to be difficult. However, Cleveland fans are as hungry for football as those from any other part of the world; if Kosar’s Gladiators continue to put on a show each night, it’s reasonable to assume that their popularity will continue to grow into the foreseeable future. 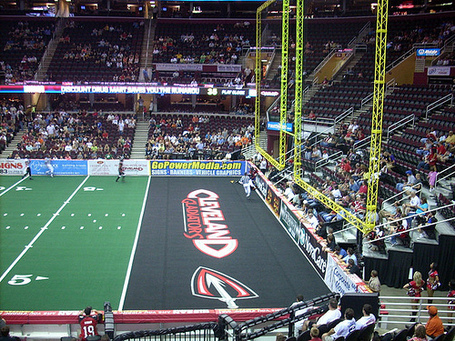