The Ohio State Buckeyes officially unveiled their "rivalry" uniforms for their game against Michigan.

After a lot of speculation and plenty of leaks, the Ohio State Buckeyes officially revealed their "rivalry" uniforms for the 2012 iteration of The Game against the Michigan Wolverines. We've known for months that there was going to be alternate uniforms, and recently the word "rivalry" has shown up.

They look an awful lot like Nike Pro Combat uniforms, but there hasn't been much promotion from Nike, so they don't technically fall under that line. There's a lot of hype around those, and for these, all of the hype has been from the school itself.

Land-Grant Holy Land has a full gallery of pictures, and we also have one of them embedded below. They also have a press release from the university, in which they say that the uniform hints back to the 1967 Buckeyes, and you can judge that one for yourself.

Below, here's the first promotional image, and don't forget to click the link above for the full gallery. 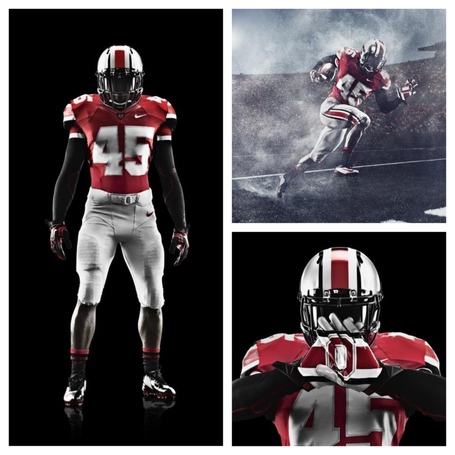