About this time last year, Cleveland fans were barraged with announcements of new and creative food options to be offered at the Indians' Double AA affiliate Akron Aeros' Canal Park. Now, another Northeast Ohio affiliate of the Tribe is getting in on the outrageously excessive concession offerings. The Lake County Captains sent out a release and tweet introducing the "Moby Dick" sandwich, a three-pound, 4000 calorie belly-buster. It runs for a cool $20 and "comfortably" feeds four.

A photo and more info on just what's on this 15'' roll after the jump:

The Moby Dick features a 15" sesame seed hoagie roll, five quarter-pound fish filets, eight slices of cheese, six ounces of clam strips, one-third pound of French fries, one cup of cole slaw, all topped off by gobs of lettuce, tomatoes, pickles, and tartar sauce. The price for the sandwich is only $20.

A photo of the sandwich below: 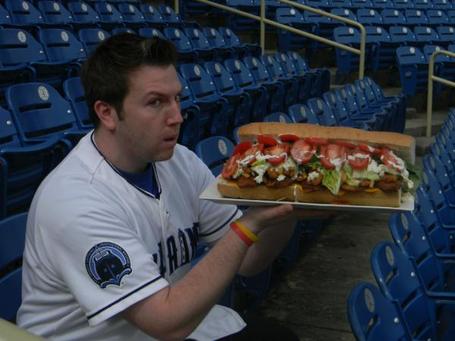