Lenzelle Smith, Jr. was one of the heroes of Ohio State's seven-point Elite 8 victory on Saturday night against Syracuse. He finished with 18 points, one shy of the team-high scored by the other Buckeye hero, Jared Sullinger. Smith hit two huge rainbow threes from the right wing that quickly halted Syracuse momentum in the second half. He also had a perfect floater in the lane at a most crucial juncture with less than four minutes to play.

This performance was made all the more amazing by the fact that he played nearly the entire game with three stitches above his right eye after sustaining a nasty gash early in the first half. Smith's performance made him a focal point of many post game stories, with everyone trying to get a pic of the busted-up eye. On Sunday, assistant coach and all-star tweeter Jeff Boals provided an up-close image of the aftermath one day later.

Photo after the jump (not for the squeamish): 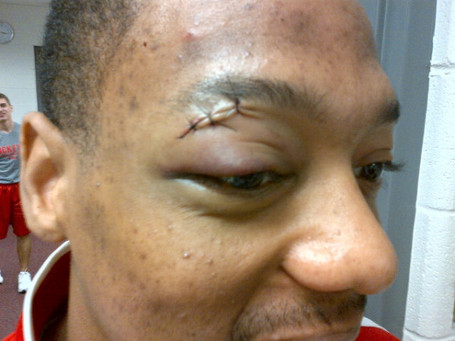 For more news, analysis, and discussion on the Buckeyes and their run to the Final Four, check out Along The Olentangy, SB Nation's Ohio State blog.