With the No. 4 pick in the draft, many mock draft experts have the Cleveland Browns taking Alabama running back Trent Richardson. He's an elite talent that the Browns will no doubt put through the full scouting process. It was already reported on Thursday that they would host him for a pre-draft visit. But first, the Browns scouted the running back at Alabama's second pro day in Tuscaloosa.

Richardson spent his Thursday morning working out for a host of NFL scouts. The Browns sent running backs coach Gary Brown (below) to take in the workout, while other team representatives are in College Station for Texas A&M quarterback Ryan Tannehill's pro day workout. Brown witnessed Richardson run an unofficial 4.58 in the 40-yard dash which is on the slower end for first-round running backs. His former teammate, Mark Ingram, ran a 4.62 and went at the end of the first round. Richardson, however, is coming off minor knee surgery which kept him out of the combine workouts. His knee has held up just fine so far in the workout on Thursday. 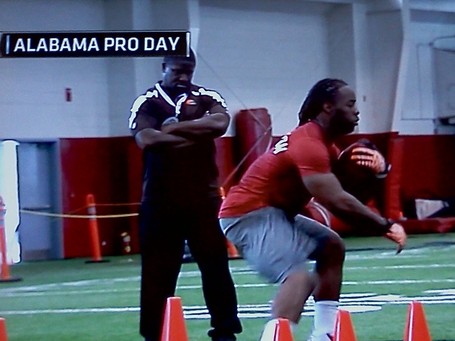 For more on the Cleveland Browns, go to Dawgs By Nature. You can also head over to SB Nation's main NFL hub at SBNation.com/NFL. For analysis of the draft, visit Mocking The Draft. And click here to follow SB Nation's NFL bloggers mock draft.

2012 NFL Mock Draft: With Draft Completed, Extremely Early Predictions For Next Year Are Out