As we noted earlier, Cleveland Browns' running backs coach Gary Brown is in Tuscaloosa scouting Trent Richardson's pro day workouts. A highlight of Richardson's day so far was a moment when he sent Brown flying during a blocking drill. Brown went tumbling out of the frame and onto his backside after Richardson put his arms into the blocking pads. All the scouts in attendance immediately started cracking on Brown, who is a very large man and not easy to move. But Richardson has long been known for his incredible strength and power and he easily sent Brown flying five yards.

Video after the jump:

An animated gif below: 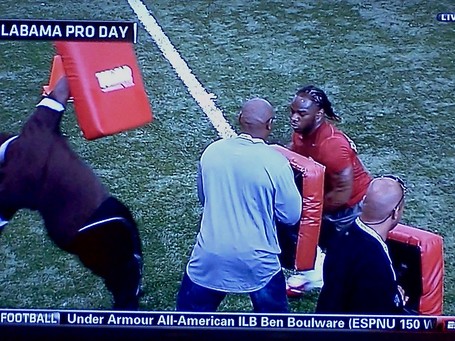 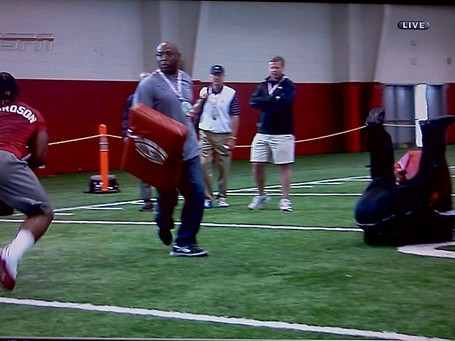 ESPN spent the remainder of Richardson's workout talking about his power with their cameras on the Browns' running backs coach.

Danny Kanell mentioned to Richardson that most people on job interviews wouldn't normally knock over the person interviewing them. The running back, however, said he's used to it during the drill:

"That's something I'm kind of used to. That's what we do at 'Bama. And that's what we've been taught. Coach Burns teaches us to get your hips through and that was one thing I had to work on. He fell down and I felt kind of bad for him because we were on national TV. He was laughing and showed me a text message from one of his coaches."

For more news, analysis, and discussion on the Browns, visit Dawgs By Nature. For all your draft and free agency news, be sure to check out SB Nation's NFL news hub. For analysis of the draft, visit Mocking The Draft.

2012 NFL Mock Draft: With Draft Completed, Extremely Early Predictions For Next Year Are Out