The Cleveland Cavaliers' Kyrie Irving is expected to be named Rookie of the Year next month, after a fantastic 2011-2012 season. The main competition with Irving for the award was Ricky Rubio, who unfortunately fell out of the running after tearing his ACL in early March. That injury almost assured Irving of the honor, and ESPN polled 30 NBA contributors from their wide span of platforms. And as you'd imagine, they all unanimously....whoops!

Screencap of the voting after the jump:

Yes, ESPN Deportes Alfredo Berrios was the lone holdout, opting to still vote for Ricky Rubio and spoiling the unanimous vote for Irving. The chart that results, however, was well worth it in laughs.

Via Trey Kerby at The Basketball Jones: 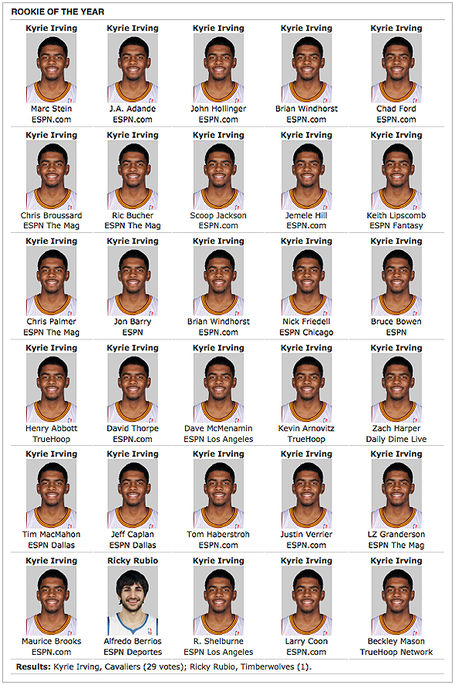 For more news, analysis, and discussion on the Cleveland Cavaliers, visit Fear The Sword. For all your NBA coverage, including playoff previews and season awards predictions, visit SB Nation's NBA hub.