The Cleveland Indians begin the 2012 season with a dynamic middle infield combination of Jason Kipnis and All-Star Asdrubal Cabrera. The young duo anchors the middle for the Tribe and success this season will almost certainly hinge on their production at the plate and defensive glovework with a heavy grounder-inducing pitching staff.

But before the season kicks off with those two, one of the best middle infield duos in Tribe history got together during batting practice at Progressive Field. Omar Vizquel, who turns 45 this month, made the Blue Jays roster as a utility player. Carlos Baerga, his former counterpart at second base, has been around the club a lot this spring as the Indians continue their initiative to embrace the past and bring back former players. Seeing these two ham it up before the game certainly brings back good memories.

Photo of the two chatting behind the cage after the jump - can you tell which one is retired and one which is still playing at 44 years old? 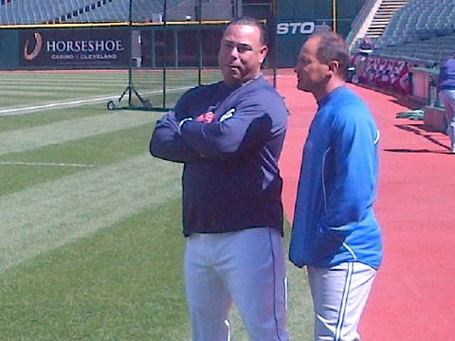 Vizquel also told the media that he would love to return to the Indians as a member of the organization when his career is eventually over.

For more news, analysis, and discussion on the Indians, check out Let's Go Tribe. And for all your MLB news on Opening Day, visit Baseball Nation.