Share All sharing options for: PHOTO: Josh Cribbs Spending His Offseason On Set With Betty White

Cleveland Browns special teams ace and wide receiver Josh Cribbs has been filming on the set of "Hot In Cleveland" this week, and has tweeted out a number of pictures from the set with the cast and crew. The star of the show is Betty White, the 90 year-old former Golden Girl who's omnipresent these days. Cribbs is always sending out goofy pictures on the his Twitter account, and adds this bit of cuddly commentary to the picture, "Me & Betty White outside our dressing room! She is the Best:)"

Cribbs also sent out pictures with other stars, including Kristin Chenoweth and Valerie Bertinelli. He's a true Renaissance man, that Josh Cribbs.

Photo with White after the jump: 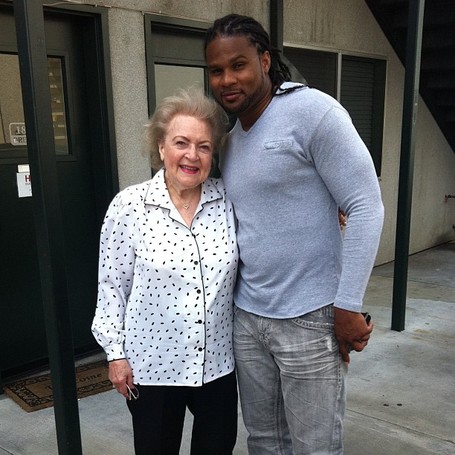 For all your news, analysis, and discussion on the Browns, check of Dawgs by Nature, SB Nation's Browns blog. For all your NFL offseason news, follow along at SB Nation's NFL news hub.