One of the consistently awkward moments of the "Kia Performance Awards" presentations are when the winner of the honor receives a car that is quite clearly not targeted for his life of luxury. The NBA, and Kia, presented the Cavaliers' Kyrie Irving with the 2012 Rookie of the Year award on Tuesday morning at Cleveland Clinic Courts. The Korean carmaker also gave Irving the keys to a brand new Kia Sorrento SUV, which he clearly does not need/want.

Like most players, however, Irving said he would donate the car and relayed a nice story about what he plans to to with the vehicle. He said he was giving the car to his former AAU program, the New Jersey Roadrunners, and told a brief anecdote about how his coach would pick up a young Kyrie and his teammates in a beat-up Windstar and cart them all around the New York metro area. Photo of Irving with his new Sorrento after the jump: 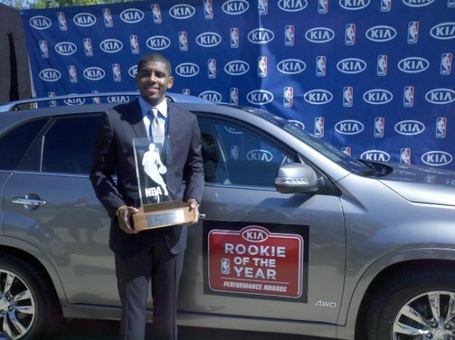 For more news, analysis, and discussion on the Cavaliers and Irving's Rookie of the Year Award, visit Fear the Sword. For all your NBA 2012 awards news and Playoffs coverage, visit SB Nation's NBA hub.