Samuel Gerard, he is not, but U.S. Marshal William Boldin from Ohio captured fugitive Bobby Thompson in Oregon on Monday night. The real story coming out of the capture will be both men's attire as Boldin brought Thompson in, which will bring a smile to Buckeye fans faces, and really anyone, for that matter. Photo after the jump: 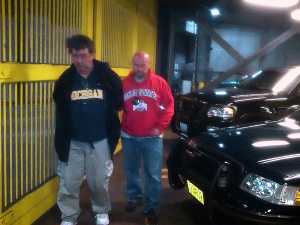