Cleveland Cavaliers owner Dan Gilbert tweeted a picture of the traveling party which will represent the organization at this year's NBA Lottery. As we noted earlier, it once again includes Browns players Joe Haden and Josh Cribbs, who both had OTAs in Berea the morning of the Lottery. When Haden was asked if he has to pay for his travel, he offered this funny and unmistakable response, via Tom Withers:

#Browns CB Joe Haden asked if #Cavs owner Dan Gilbert was paying for his trip to NBA draft lottery: "Of course. Dan's got all the money."

Gilbert also tweeted that Kyrie Irving will meet them at the event, taking place in Times Square at ABC/Disney's studios. Photo of the traveling party after the jump: 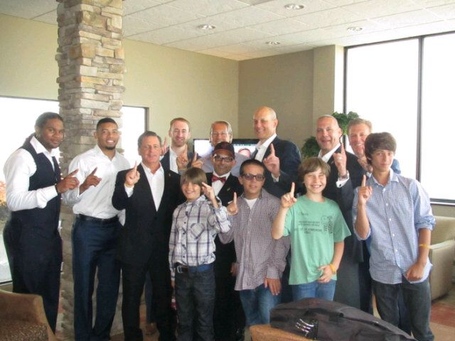 For more on the Cleveland Cavaliers, head over to Fear The Sword. More on the upcoming NBA Draft Lottery, the Draft itself and the NBA in general can be found over at SB Nation's dedicated NBA hub.