Looking for the same good fortune that landed two of the top four picks one year ago, Dan Gilbert enlisted the same large group of representatives to attend Wednesday night's NBA Draft Lottery. This includes a troika of Browns players, past and present -- Joe Haden, Josh Cribbs, and Bernie Kosar. Gilbert has never had a problem catering to the masses in Cleveland. This year, however, all three Browns are decked out in bow ties, the sartorial preference of his son Nick. Conrad Kaczmarek of SB Nation's Cavs blog Fear the Sword is in attendance at Times Square tonight, and he reports the Cavs' bow tie brigade doubles the representation from every other organization, via @ConradKaczmarek:

The Cavs have about twice as many people here than any other team.

Photo of the Browns in their bowties after the jump: 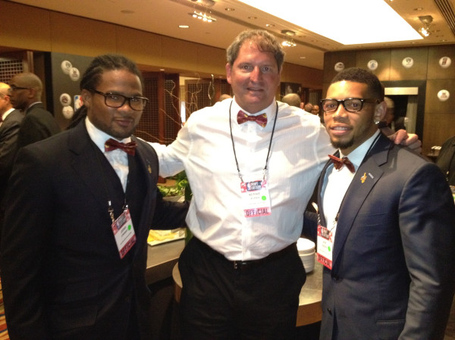 For more news, analysis, and discussion on the Cavaliers Draft, visit Fear The Sword. For more on the NBA Lottery and the 2012 Draft, check out SB Nation's NBA hub.