Share All sharing options for: PHOTO: Attendance At Progressive Field...Sparse

The Indians and White Sox are playing the first game of a day-night doubleheader on Monday afternoon, making up for a rain-out from the clubs first series last month. The game is not on TV locally, which means about 500 total people will witness this one, if the dispatches from the stadium are to be believed. Zack Meisel of MLB.com tweeted out a picture and estimate of no more than 400 people in attendance to see Zach McAllister go for the Tribe in Game 1.

Photo after the jump:

There are no more than 400 people at Progressive Field for this game. Here's a shot of behind home plate 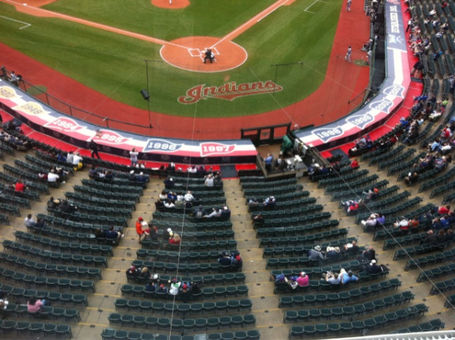 For more on the Cleveland Indians and Chicago White Sox, head to their respective SB Nation blogs, Let's Go Tribe and South Side Sox. For more news and analysis on Major League Baseball in general, check out Baseball Nation.