It doesn't take much for Cleveland to embrace their sports stars, and the Cleveland fanbase always swoons over athletes who support the other teams in town. Joe Haden, and Josh Cribbs, are two Browns players who have mastered this and are among the most popular athletes in town.

Incoming quarterback Brandon Weeden is getting an early start on this as well, with the rookie wearing an Indians t-shirt during the media session after the second session during Tuesday's minicamp. Weeden had a busy couple days, as he was last seen in a Rickie Fowler uniform at the Memorial, supporting his fellow Oklahoma State Cowboy. The former MLB prospect knows his baseball, and I'm sure Chris Perez enjoys the support. Photo of Weeden's Tribe gear after the jump:

Via Dan Murphy of Browns PR: 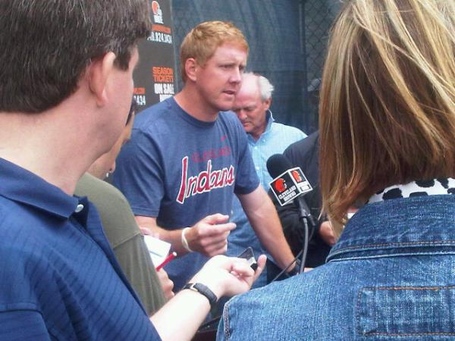 For more on the Cleveland Browns, head over to Dawgs By Nature. More news and analysis on the NFL in general as minicamps start to heat up can be found at SB Nation's dedicated NFL hub.

Josh Gordon Comes To Terms With Cleveland Browns, According To Report