Jimmy Haslam Takes In Browns-Eagles From The Dawg Pound

Share All sharing options for: Jimmy Haslam Takes In Browns-Eagles From The Dawg Pound

In a marked contrast from his predecessor, new Browns owner Jimmy Haslam took in third preseason game on Friday night in the Dawg Pound. It was some easy red meat to throw to the Cleveland fans, which will surely ingratiate him with the Browns faithful. A couple pictures of Haslam in the Dawg Pound after the jump: 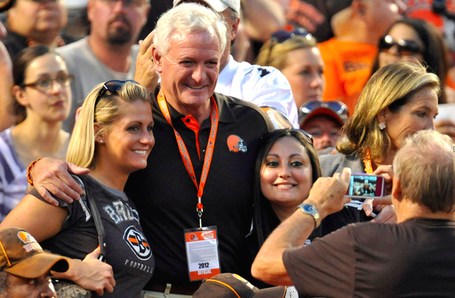 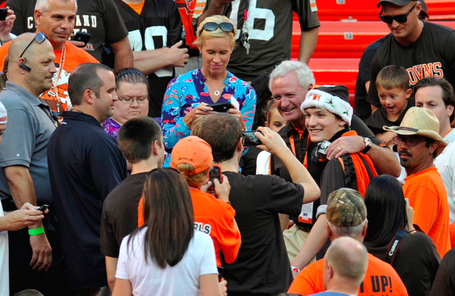 Haslam then visited the WKYC booth with Jimmy Donovan and Bernie Kosar at halftime. It was a particularly brutal night for the Browns, who looked overmatched against their Week 1 opponent. Haslam indicated that it could be a slow haul trying to bring the Browns to consistent respectability (via Cleveland.com):

"It's gonna take a little time," Haslam said at halftime while visiting the WKYC booth. "We're in this for the long run. We're not going to knee-jerk, we're going to hang with it, we're going to build through the draft. Hopefully, in two or three years we'll have the kind of talent, the kind of team the Philadelphia Eagles do."

For more on the Browns, visit Dawgs By Nature.