NIKE NFL Uniforms Could Be Special

Share All sharing options for: NIKE NFL Uniforms Could Be Special

Nike will take over NFL uniform production starting in 2012. That really isn't news. What is a bit of news is the new look that is percolating throughout the internet with 'sneak peeks' at what these uniform designs might look like. At the time of the announcement, NIKE promised to be aggressive with their designs, much like the NCAA designs the company made for Ohio State and other the past couple of seasons as part of the NIKE COMBAT line.

So what should we expect? When it comes to the AFC North, expect little to change. The Browns and Steelers have had the same look and feel for decades and NIKE will unlikely be able to change that. While these designs are considered fakes, it does go to show that with a bit of creativity and an open mind, a little updating never hurts:

Josh Cribbs never looked so badass. How about the Steelers? 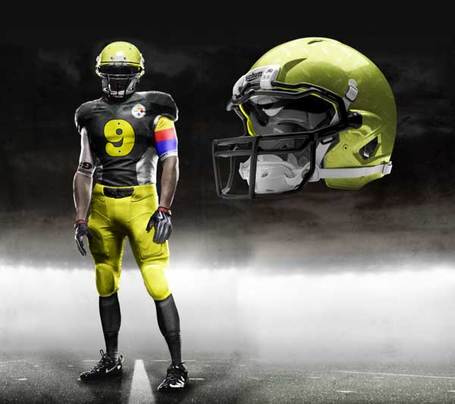 If anything screams fake it is this look, I mean, really, a yellow helmet?

Ok, what about the Ravens? 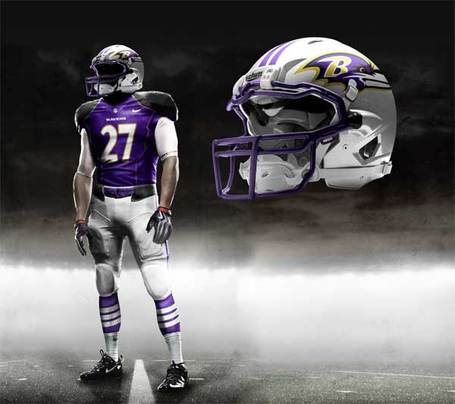 I actually like this design, though like many of the designs that were photoshopped, errr, shared, the white-helmet look just doesn't do it for me. 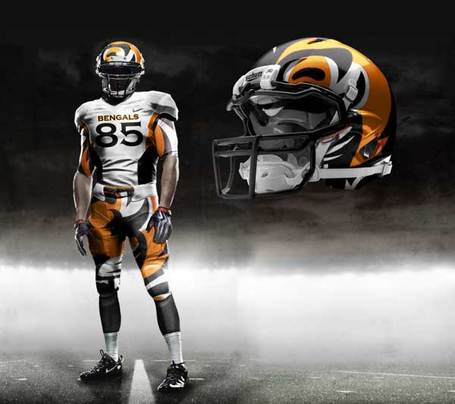 I don't know about you, but the huge image of the Bengals logo on the pants is a bit unnerving for me.

While I don't want to rain on anyone's parade, I should mention that these designs are likely to be fake. Look at the helmets. They say Schutt. The NFL is a Riddell shop, meaning any mock-ups provided by NIKE would have all current NFL-branding. Cue the game-show loser music.