2011 NFL Draft: Owen Marecic To Bring His Versatility To Browns

Share All sharing options for: 2011 NFL Draft: Owen Marecic To Bring His Versatility To Browns

With their second pick in the fourth round, the Cleveland Browns have gone with toughness, selecting Stanford FB Owen Marecic. At 6'0", 248 lbs, Marecic played both LB and FB at Stanford and has that combination of intangibles that seem to always entice coaches.

The question obviously is, where will Marecic play? He'll be an unbelievable practice player, bringing an invaluable sense of energy and football instincts to the game, and his work ethic is very strong. But, he's a bit of a tweener for both positions, and it is pretty much a guarantee that he won't be playing LB at the next level.

This selection brings up the question of just how long Lawrence Vickers will continue to be a member of the Cleveland Browns. Vickers has been nothing but the consummate professional in Cleveland, and has been pivotal to the success of the running game, but Cleveland would not take a FB in the fourth round if they weren't planning on playing him.

Marecic is noteworthy for the strange, but amazing sequence in which he scored on one play, and with the next official play after the kickoff, picked off a ball and ran it in for a touchdown. He is a very heady player who never quits and is a nightmare to line up against, but with the other needs the Browns have at this point in the draft, this is still a strange pick to say the least.

Regardless, the thought of Marecic and Hillis in the backfield brings the words TRUCK STICK (in all caps) to the forefront of my mind, and it's only a matter of time before I'm sure someone makes a Bash Brothers shirt. 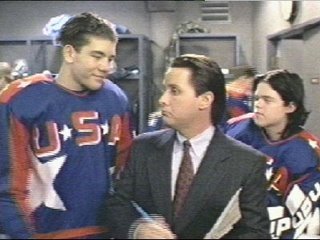