Most people focus on what players their teams will bring in when NFL Free Agency starts.  At the same time, teams need to try and keep their own players that are now free, thanks to the new CBA agreed to between players and owners earlier today.  As expected, players with at least 4 years of accrued service are now free agents.  How does this affect the Cleveland Browns?

Below is a list of players that ESPN.com listed as Unrestricten Free Agents for the Browns as Free Agency gets set to begin: 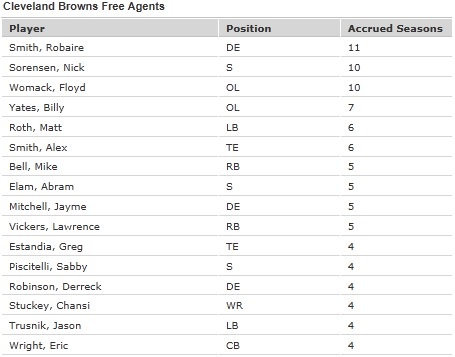 Specifically, nine players in the above list were NOT free agents if the season were to be played under 2010 rules.  The Browns cold have tendered offers to all the 4-year players, like CB Eric Wright, but now those tenders are void.  All the players above are free to sign with other teams once Free Agency starts on Friday, July 29, at 6:00PM et.