Browns at the Bye: Joe Banner, Pat Shurmur, and what comes next in Cleveland?

The Browns will be idle this Sunday, but Ryan Alton is here to take a look at what lies ahead for Pat Shurmur and his young team in the second half of the 2012 season.

Share All sharing options for: Browns at the Bye: Joe Banner, Pat Shurmur, and what comes next in Cleveland?

The Bye Week is here. We finally get a break from the ups and the downs of the season to sit back and reflect on what has transpired and to think ahead to what might be in store down the road for our beloved Cleveland Browns. It hasn't exactly gone as planned if you, like me, were optimistic that the new additions to the team in the offseason would surely take them to the next level. After a 4-12 season in 2011, we were literally promised that things would be better and I truly believed that, though it might not show up in the win column. However, the people I talk to on Twitter might be the first to note how quickly my tone changed once the Browns bungled their way to an 0-5 start to the season. And just when it seemed like they might be turning a corner, winning two out of three with a team poised to explode, Baltimore came to town to knock us back to Earth with a resounding thud. Things, they seem, haven't changed much at all. But unlike seasons past, there may be a light at the end of this tunnel. Here are my prevailing thoughts as we venture into the great unknown that is the future of the Cleveland Browns...

On Pat Shurmur‘s Future... Despite new Browns CEO, Joe Banner, making the media rounds this week claiming that no decision has been made regarding the future of the Browns head coach, it should be no surprise when Pat Shurmur is let go at the end of the season. According to the interview conducted by Mary Kay Cabot of the Plain Dealer, Banner said wins and losses won't necessarily determine who stays and who goes amongst the coaching and front office staff. If you're Shurmur, facing a record of 2-7 with seven games to go, that's good news.

However, Banner also said "We're looking for leadership, attention to detail, character, those kinds of things, etc." While he didn't exactly come out and say it, it's hard to see where Shurmur excels in that list of criteria. I suppose you could make the case that Shurmur is a man of high character and he has the leadership abilities to sell his plan and, thus far, get his players to buy in. But attention to detail? Now that is an area, I don't think anyone can argue, where Shurmur is clearly lacking. Football is a game of inches and it seems like the Shurmur-led Browns always manage to fail to get that extra inch when they need it the most.

What's more is Browns wide receiver Josh Cooper told a local Cleveland radio station on Thursday that he isn't sure if Shurmur or offensive coordinator Brad Childress is actually calling the plays. Say what? How does an offensive player not know who is actually calling the plays? The general thought in the offseason was that bringing Childress on as the coordinator would help alleviate the burden on Shurmur. That may be true during the week when the team practices and installs the game plan but clearly it hasn't had the desired effect during games. In fact, one could argue, the in-game decision making this season looks worse than it did last season! I honestly didn't think that was possible. 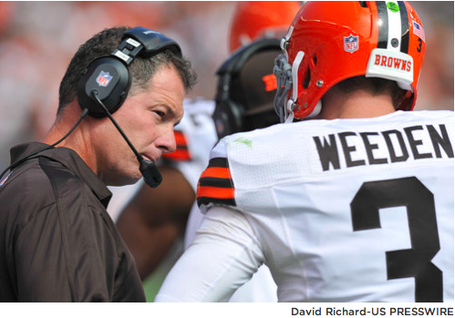 One other thing of note from Banner's interview was the fact that he admitted to having a certain bias toward a head coach who has control over the 53-man roster because he saw Andy Reid have much success with it while he worked with him in Philadelphia. While he won't likely allow that to completely determine who he and owner Jimmy Haslam will hire/fire, it's obviously something he is weighing. If that's any indication as to what sort of operation Banner will be running, it doesn't bode well for Shurmur or GM Tom Heckert to return here in Cleveland in their current roles. However, I do feel that Heckert has a better shot of staying than Shurmur at this point.

On the Next Head Coach... Unfortunately for Haslam and Banner, if they do decide to make a change, they're sure to have some competition across the NFL as they try to sway candidates to come to Cleveland. This off-season in particular seems to be shaping up to be quite tumultuous in terms of current head coaches getting the dreaded pink slip sometime in early January. Philadelphia, Jacksonville, Dallas, Kansas City, Carolina, San Diego, Washington, New Orleans, and Cincinnati are just some of the teams that are currently underperforming and could quite possibly look to inject new life into their organizations this offseason. If so, the new Browns brain trust will have their work cut out for them as they seek to woo top-notch coaching candidates to the city by the lake. And last I checked, the road to the playoffs still runs through Pittsburgh and Baltimore in this division.

Also working against Haslam and Banner is the fact that the Cleveland Browns, as people around the league are well-aware, haven't exactly been a model for long-term job security for head coaches. In fact, Cleveland seems to be the place where either young, inexperienced coaches cut their teeth before moving on to have success some place else, or where old coaches and players alike go to fade away into early retirement. A recent poll conducted by The Sporting News had current NFL players rank the worst franchises in the league and... guess what? "We're Number One! We're Number One!"

Be that as it may, there is already new blood in Cleveland and it will be up to them to somehow sell their vision to prospective coaches. Additional selling points might include the fact that the Browns have an influx of young talent, especially on the offensive side of the ball that is seemingly primed to break out sooner rather than later. An offensive-minded coaching prospect might be inclined to think it wouldn't take much to deprogram them from Shurmur's archaic West Coast terminology and mold them into a system where they have a better understanding and an easier transition to the pro game. Whereas a roster full of older players might have a much more difficult time relearning a new system, the Browns roster is chock full of young, hungry talent looking for someone to lead them.

Any coach looking for work might like the fact the Browns have an owner who seems willing to spare no expense to upgrade the organization, a young team full of young players heading into their prime and a CEO who likes the idea of giving his head coach final say over the 53-man roster. Cleveland may not have the palm trees of San Diego or the nightlife of New Orleans, but it has its advantages for a coach looking to resurrect a team from the ashes and make it a contender. Besides, any coach that comes to Cleveland and wins a Superbowl will be immortalized forever not far from the city where pro football was born. Just maybe Cleveland isn't looking too shabby after all.

On the remaining schedule... During the offseason, or even the preseason it's very difficult, though we may try, to look ahead at the regular season schedule and project how each game will go and what the final record will be once the year is over. But now that we're at the midway point for most teams, we have a pretty good idea of the contenders and the pretenders, as they say. The Browns are already 2-7 and have virtually no shot of making the playoffs for the tenth year in a row. Hooray! But every year, they always seem to scrape through and pick up a couple of wins down the stretch long after they've been written off by everyone outside of the Buckeye state. This year, unfortunately, the schedule doesn't offer much hope in the way of a momentum-building winning streak to finish the season. 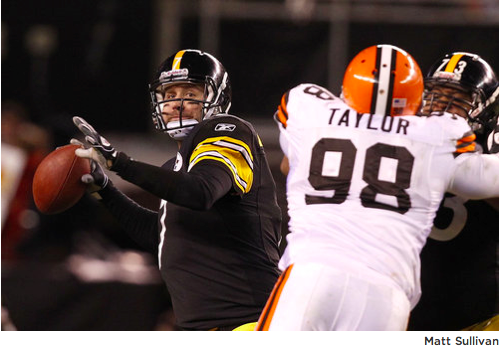 After the Bye, the Browns face the Cowboys, who are having their own issues right now as well. However, nothing seems to cure what ails you in the NFL better than playing the Browns. The Browns have yet to win a game on the road this season and have to travel to Dallas. Not an easy task to pull out their first road win of the season there. Then, the Browns return home to face the Steelers for the first of two meetings this season. The Steelers aren't what they used to be but they've seemed to right the ship in recent weeks and will be motivated heading late into the season to make another playoff push. It would be a huge feather in the cap of Pat Shurmur if he could somehow beat the Steelers. But I wouldn't get my hopes up. After Pittsburgh, the Browns travel out to Oakland to take on the Raiders in a winnable game. On the road in the Black Hole isn't the best of circumstances but this is one of those games where it really could go either way.

The Browns finally get a reprieve when they come home to face the lowly Kansas City Chiefs, led by ex-Browns coach Romeo Crennel. This should be a win unless somehow Romeo gets his team fired up to play the team who paid him handsomely to not coach there anymore. Stranger things have happened. The following week, the Browns are home again to face the quarterback they could've had if Mike Holmgren hadn't balked at the price St. Louis demanded for the right to draft Robert Griffin III. The winner of that trade, or lack thereof, may not be known for some time but that won't stop bragging rights from being assigned to the winner of this game for the time being. The Browns wrap up the season with two games on the road, at Denver and at Pittsburgh. Peyton Manning and Ben Roethlisberger. Ugh. Not much else needs to be said in that regard.

Granted, looking ahead to the remaining schedule can paint a pretty grim picture if you're not convinced Pat Shurmur is the right head coach or Brandon Weeden is the right quarterback for the future. While I expect Weeden's play to continue to improve as the season goes on, it's hard to tell how the players will react if they begin to sense that Shurmur is a dead man walking. And from everything I'm seeing and hearing, there's no reason to assume he isn't. However, if the players are smart about it, they'll continue to play hard and try to win for the simple fact that they're being evaluated too. All anyone can do for the remainder of this season is worry about what they can control and do their best to block out the uncertainty that lies ahead. For some of the older players on this roster, they're used to this and they know the routine, while the younger guys who have never been through it really don't know any better. For the fans, well, it's become routine for us too. All we can do is sit back and watch it all unfold once again. And pray that THIS time, it finally gets done right. Just remember, it all starts at the top.