For more on the Cleveland Browns, go to Dawgs By Nature and check out their open thread for the uniform unveiling.

The new Nike NFL uniforms were unveiled on Tuesday, with huge changes coming to ... the Seattle Seahawks, and minimal changes coming everywhere else. While there's differences in design, color schemes and patterns are largely the same throughout the rest of the NFL. The biggest differences you'll notice on the new uniforms are the material for the jerseys, which of course, is a bigger change for the players.

However, there's little differences here and there, like the texture of the pants that's clearly visible, on top of the new collars for the jerseys themselves. The lines on the jersey are more pronounced in many areas, and things of that nature. Now that we've taken a look describing those, how about a look at what the Cleveland Browns will be sporting? 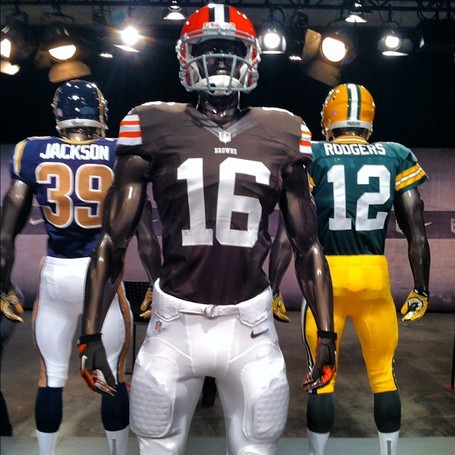 As you can see, the biggest changes are all in regards to material - it makes it look shinier here, or sleeker there, but there's no big changes for the Browns in regards to the color scheme or arrangement of said color scheme. The only changes are changes that are across the board, like the Nike "swoosh" or the mesh on the sides of the jerseys.