SB Nation is present at the NFLPA Rookie Premiere event in Los Angeles, catching up with all of the top picks from the 2012 NFL Draft. SB Nation Cleveland has already given you video of the Browns' second first round pick Brandon Weeden's interview with SB Nation's Amy K. Nelson and a quote from their first overall pick Trent Richardson about how he will continue to run 'angry' in the NFL.

Shortly thereafter, Richardson and Weeden decided to hone their own media skills at the event, taking turns interviewing one another for a bit of a different approach. We have a picture of Richardson holding the mic for Weeden after the jump via SB Nation's Joel Thorman. 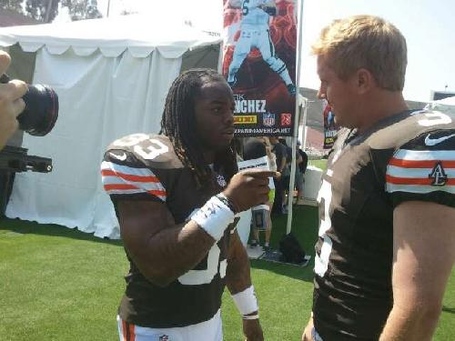 If you're looking for more on the event, check out SB Nation's YouTube channel or Joel Thorman's Twitter page. Joel is tweeting just about everything he experiences at the event and is definitely worth the follow.

Josh Gordon Comes To Terms With Cleveland Browns, According To Report