Share All sharing options for: Moment of impact: Huge hit on Josh Cribbs captured in photo

Video of the impact of jarring hit on Cleveland Browns return man Josh Cribbs in Thursday's game by Dannell Ellerbe of the Baltimore Ravens clearly showed the impact it had on Cribbs.

This photo by Evan Habeeb of U.S. Presswire, however, caught the moment of impact perfectly as Cribbs' helmet was flying off: 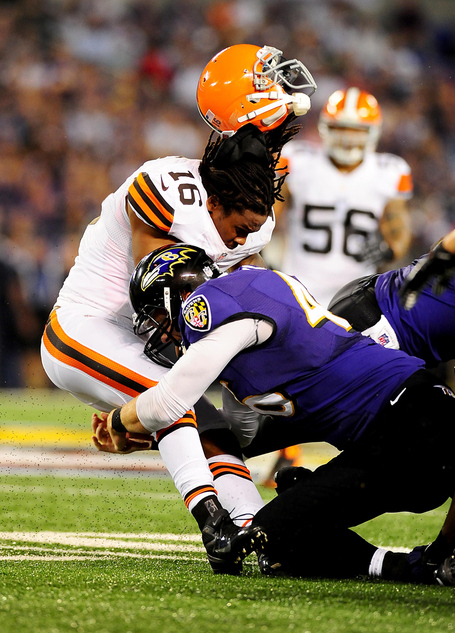 The impact caused Cribbs to not only lose his helmet — his head hit the turf on the way down and he was also hit in the face inadvertently by the spike of another player involved in the play. Cribbs fumbled on the return and Baltimore recovered.

Cribbs won't return to the game, but he was reportedly walking around on the sidelines and told trainers he was fine after going through concussion tests. He was reportedly knocked unconscious on the field.

Baltimore opened the third quarter with a 9-7 lead over Cleveland. The game has been filled with several big hits by players on both teams.

Browns vs. Ravens: Cleveland falls to 0-4 after 7-point loss in Baltimore