Share All sharing options for: Mike Brown Was Hired By The Lakers And LeBron James Likes It

Mike Brown was hired by the Los Angeles Lakers on Wednesday as the team's next head coach after being let go by the Cleveland Cavaliers just one year ago.

There have been plenty of opinions thrown around regarding the hiring of the coach that led the Cavs to the NBA Playoffs during all five of his seasons at the helm. The one that will be talked about the most, aside from Kobe Bryant's, will that of former Cavs defector LeBron James.

The two certainly seemed to have their differences at points during Cleveland's five straight seasons of basketball relevance, but only James would really know how Brown might be able to handle the glitz, the glamor and MVP candidates in Los Angeles.

So what does he think? 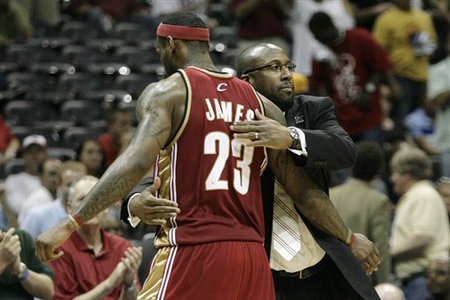 "If it's true, when it's official," James told NBA.com's John Schuhmann, "I think the Lakers got them a great coach."

A great coach that was never able to get the Cavs an NBA championship despite having the league's Most Valuable Player, but a great nonetheless, huh LeBron?

"Mike Brown was a great coach. He gave us success that we hadn't had before in that city. And it started with his defensive concepts. He brought in a defensive mind set that we didn't have," James said. "We were competitive year after year because of his coaching. So I respect him and I'm grateful to have had him as a coach throughout the years that I had him. He definitely helped me become who I am today."

It's kind of interesting that James is currently leading his team to the NBA Finals while Mike Brown will inherit one of the NBA's best rosters for next season after both were in Cleveland just one year ago, but that's apparently just the way the cookie crumbles.