Share All sharing options for: Indians Tweak Home And Road Uniforms For 2011

The Cleveland Indians are making some subtle changes to their home and road uniforms for 2011 the team announced.

Mainly, the team has added a retro road uniform as well as a couple "vintage" caps of either red or blue featuring a block 'C'.

The home alternate uniform will showcase a new home alternate red cap with a midnight navy block "C" that is vintage Indians baseball. This new cap will team up with the crème colored uniform, unveiled in 2008, which includes block "Indians" lettering on the front chest, Chief Wahoo on left sleeve and "midnight" navy blue piping on the pant. Finally, the uniform will still include a red player number on the back with navy blue outline and does not include the player name. 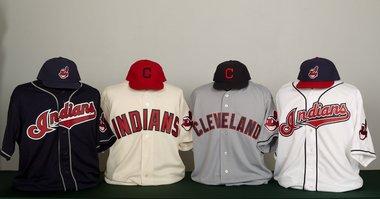 The new traditional road gray uniform will showcase a new block "CLEVELAND"" lettering on the front of the chest, similar in style to block "Indians" on home alternate, to replace the previous script "Cleveland". This will be combined with the midnight navy blue cap with a red block "C" that was previously used with home alternate uniform since 2008. The uniform will include a blue player name and number on the back with red outline. This uniform is reminiscent of the uniform of 1901 as block "Cleveland" was present on the road uniform when the club became one of the American League's charter members.

The alternate road navy uniform with "Script Indians" will now be combined with the navy blue "Wahoo" cap, previously worn with the traditional road gray uniform.

You can pick up your own version of the new uniforms right now at Indians Team Shop locations.