Well, look what Spring Training dragged in ... Obviously, most of the photos that come out of the early days of baseball are more than banal, and Jon Bois did a terrific job of shining some light on that in his diary entries from "Brad," but once in awhile, you get a nice surprise.

Tuesday, rumors were flying that Albert Belle would be stopping by Goodyear to say hello to the Cleveland Indians, and there he was in all his glory, via Jordan Bastian's Twitter feed. 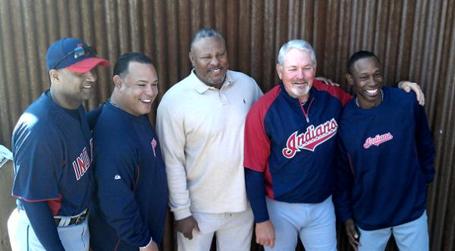 That's Sandy Alomar Jr., Carlos Baerga, Belle, Mike Hargrove and Kenny Lofton. Man, Joey looks old. Hurling baseballs into the stands must have really taken it out of him. Lofton seems like he could still steal 20 bases if he wanted to, and Alomar could make a run at it behind the dish. Baerga looks age appropriate.

For nostalgic Tribe fans, this picture has it all.