At the time of writing, the Cleveland Indians are taking on the Chicago White Sox at home - and are down 4-1 in the third inning. It hasn't been a good showing so far from the Tribe, but aside from the viewers watching at home, there's ... not a ton of folks in attendance to really absorb the (presently) losing effort. That is to say, Progressive Field in Cleveland, Ohio appears to be decidedly empty, or at least it was shortly before first pitch.

After the jump, we've got a picture, courtesy of a user on Twitter, that shows the stadium during the National Anthem. Given the view, it looks like there's about 1,000 people in there, but it's definitely hard to tell. Since the picture, it's gotten a bit more dense, but it's still alarming to see something like that with so little time to go before the game gets started (coupled with the noticeable lack of foot traffic, eliminating the "people just aren't at their seats yet" excuse).

Make the jump for the picture, which looks a lot similar to the way the stadium looked just five minutes before first pitch of a recent Oakland A's game. The A's reported above 10,000 attendance following that game ... safe to say it was a little inflated. 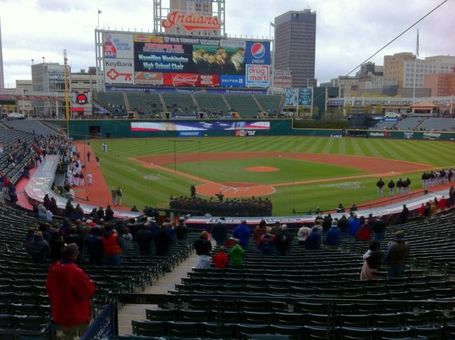