Share All sharing options for: You Can Give Up On Your Delusions Of Mark Cuban Owning The Indians

Dallas Mavericks owner Mark Cuban took to Twitter late Thursday night to talk about the Republican Convention, Mitt Romney, the economy, and tax matters. But slipped into the barrage of tweets on non-sports issues was a quick response to an inquisitive Clevelander. The billionaire NBA owner was asked if he'd be willing to purchase the Cleveland Indians, and his response was short and sweet (after the jump): 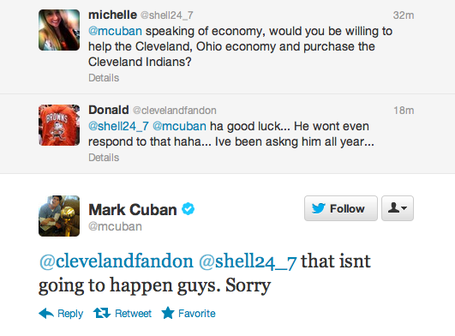 There have been baseless rumors over the years that Cuban might be interested in buying the Indians (with reports of his interest in the Cubs and Pirates having slightly more legitimacy). You can end your delusions about Cuban pulling the Tribe from the throes of the Dolan regime.

Obviously, the Indians brutal summer has added to the despair, depression and anger at owner Larry Dolan. That will lead to rampant and hopeful speculation. Maybe you can keep your Dan Gilbert hopes alive?

For all your Indians news and notes, visit Let's Go Tribe.