Former coach Jim Tressel is still beloved at Ohio State, despite the fact that he left the team on probation due to numerous NCAA violations.

The Ohio State Buckeyes are currently ineligible for postseason play due to infractions that occurred on the watch of former coach Jim Tressel. That's especially painful this season, as the Buckeyes are undefeated and could be playing for a national championship. But apparently that means very little to Ohio State fans, as Tressel and his 2002 championship team received a raucous ovation on Saturday: 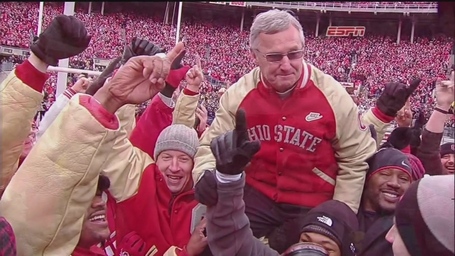 The 2002 players lift Tressel onto their shoulders as crowd goes wild. Wow. #MICHvsOSU

Tressel resigned from his post as Ohio State head coach on May 30, 2011 amid a scandal that had the NCAA investigating rules violations that happened during the 2010 season. Much of the scandal centered around a financial arrangement a local tattoo parlor had with numerous football players, including star quarterback Terrelle Pryor. The infractions put the Buckeyes on probation and banned them from postseason play in 2012.